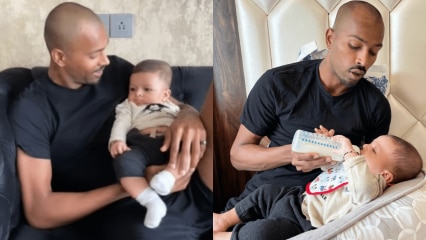 India all-rounder Hardik Pandya, who won the Man of the Series award in the recently concluded T20I tour of Australia, reunited with his son Agastya after four months on Saturday.

Days after becoming a proud father, Pandya had jetted off to UAE for the 13th edition of the Indian Premier League (IPL). After the conclusion of the showpiece event, where his side Mumbai Indians lifted their fifth IPL title, the all-rounder headed to Australia with the national team for the limited-overs fixtures — ODIs and T20Is.

Pandya on Saturday shared a heartwarming picture in which he is seen feeding milk to his son. “From national duty to father duty,” Pandya captioned the post on Twitter.

After the conclusion of the white-ball tour, Pandya had handed over his Man of the Series award to newcomer T Natarajan.`Yorker king` Natarajan who came to Australia as a net bowler, not only made his debut but also impressed one and all in the limited-over series.

Speaking to ANI on handing the pacer his award, Pandya had said he strongly believed in backing people to achieve their dreams and for him, the youngster truly deserved the award.”I want people to believe in themselves and to achieve anything even if odds are against them. It`s just my way of appreciating his hard work over the years. For me, Natrajan deserves the Man of the Series award. To perform so brilliantly on his debut speaks volumes of his belief and the talent he possesses,” Pandya had said.

Pandya was missing his son and had said he wanted to spend time with his family “I haven`t seen my child for four months, so I`d like to spend some time with family right now,” Pandya had said after the third and final T20I against Australia.On July 30 this year, Pandya had shared the news of him and Natasa Stankovic becoming proud parents following the birth of their first child. (ANI)

Sunny Leone looks stunning as she steps out for New Year...