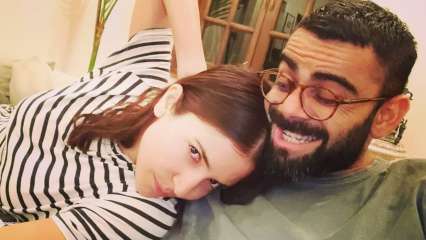 Virat Kohli and Anushka Sharma complete three years of marital bliss on December 11. The couple tied the knot secretly in Italy and broke the Internet instantly. Before tying the knot, the couple hid their relationship for quite some time and it was during an ad shoot they met each other for the first time. After constant link-ups, Anushka admitted in 2015 that she is in a relationship with Virat during an interaction with Filmfare.

Now, we got our hands on an old interview of Anushka from the year 2014. During the interaction with the magazine, Anushka was quizzed about ‘certain Virat Kohli on the scene’ hinting at their new relationship back then. Denying and calling the Indian skipper as her friend, the actor had said, “Whatever’s been reported is not what it is. If you’d ask me did Virat come to my house? Yes. Is he my friend? Yes. Do I know him? Yes. But there are other details people don’t know.”

Talking about their television commercial together and the atmosphere on the sets, Anushka went on to share, “We did an ad together. I put on an arrogant front because he’s believed to be arrogant too. Before he acted tough, I wanted to have an upper hand. But when I met him, he was so easygoing, intelligent and funny. Considering it was a three-day shoot and on the second night I had called my friends over for dinner to celebrate my new house, I invited him too. That’s where it started. There were other people too but they didn’t make headlines.”

After admitting to a relationship with Virat in 2015, Anushka was also asked if constant media glare and trolling took a toll on them. To which she had said, “We’re both cut off from everything. When it takes away from your work then it’s a problem. It doesn’t take a toll on your relationship. Virat and I are quite strong. But it definitely does on your work. He wants to focus on his work. The baggage of his relationship in the media is something else. If he scores well, it’s attributed to me, if he doesn’t play well, it’s because of me. I’m blamed for everything. I don’t understand. But all this doesn’t harm our relationship. I wouldn’t be with someone if we were not on the same wavelength.”