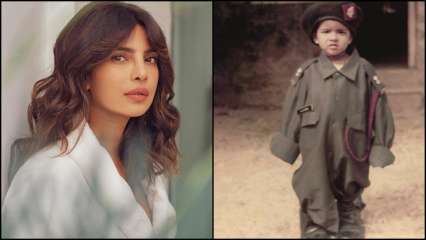 Priyanka Chopra Jonas is gearing up for the release of her memoir titled Unfinished. Ahead of that, the actor decided to share a few glimpses on her social media pages much to the excitement of the fans. On Thursday, Priyanka took to her Instagram page and shared her unseen childhood photo in which she is seen wearing her dad’s Army uniform. The actor is showing a grumpy face in the photo. PeeCee also revealed that the photo is a part of her album in the book.

Priyanka started by writing, “#TBT to little Priyanka. This is a photo from the album in my upcoming book. I used to love following my dad around the house dressed in his Army uniform. I wanted to grow up and be exactly like him. He was my idol. My dad encouraged my sense of adventure. Even as a little girl…”

She further penned, “I  was always out exploring, looking for adventure, trying to uncover something new. My urge was to do something that hadn’t been done before, to discover something that no one had found yet. I always wanted to be first. That urge drives me every day, in every single thing I do. #Unfinished @penguinrandomhouse @randomhouse @prhaudio.”

Unfinished: A Memoir will be out in early 2021 and Priyanka had shared the jacket of her book recently on her social media pages.

Describing her book, Priyanka wrote, “Ironically, I named this memoir years before I started writing it. Having been a public person now for 20 years, with so much life to live and a long list of things to check off my list personally and professionally, I am very much #Unfinished. BUT the funny thing about writing a memoir is that it forces you to look at things differently, reconciling so many things you thought you had put to bed. In doing so I’ve realized that being “unfinished” has a deeper meaning for me, and has in fact been one of the most common threads of my life…”