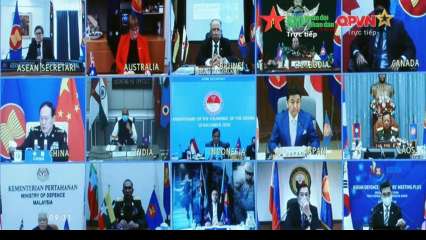 Indian and Chinese defence ministers on Thursday shared the platform at the ASEAN Defence Ministers Plus (ADMM) meeting during which the Indian side raised the issue of “threats to rules-based order” and “actions (that) complicate the situation”.

Addressing the meet virtually, Indian defence minister Rajnath Singh said, “Threats to the rules-based order, maritime security, cyber-related crimes and terrorism, just to name a few, remain the challenges that we need to address as a forum.”

Without directly referring to China, he said, “As we enhance mutual trust and confidence, exercising self-restraint in the conduct of activities and avoiding actions that may further complicate the situation, will go a long way in bringing sustained peace to the region.”

He pointed out, “Amid the current regional environment with visible strains, we appreciate the central role of ASEAN-led forums, including ADMM Plus in promoting dialogue and engagement towards a pluralistic, cooperative security order in Asia.”

Earlier in September, both Indian defence minister Rajnath Singh and Chinese defence minister Wei Fenghe had met to defuse the situation on the sidelines of the Shanghai Cooperation Organisation defence minister meet in Moscow. Since then, a number of meetings have taken place at the diplomatic and military level, but the Chinese build-up remains.

On the COVID crisis, he said that “virus does not respect national boundaries, the response to the pandemic also needs to be collective and collaborative.”

The Indian defence minister also recalled the ASEAN Outlook on the Indo-Pacific which he said, “underscores this impetus to cultivate strategic trust and continuously promote ASEAN centrality in the regional architecture.”

Mumbai Night Curfew: BMC allows food delivery till 1:30 am on...