Actress Kriti Sanon, who on Wednesday confirmed via a social media post that she has tested positive for coronavirus, shared a glimpse of how she is spending her time quarantine at home with her fans.

Taking to her Instagram Stories, Kriti posted a photo of her 2017 film ‘Raabta’ co-starring Sushant Singh Rajput and apprised her fans that she is revisiting the film ‘after ages’ and thoroughly enjoying it while taking safety precautions and self-isolating after having tested positive for novel coronavirus.

Kriti clicked a photo as the film played on television and wrote over it, “Shiv and Siara after ages.” 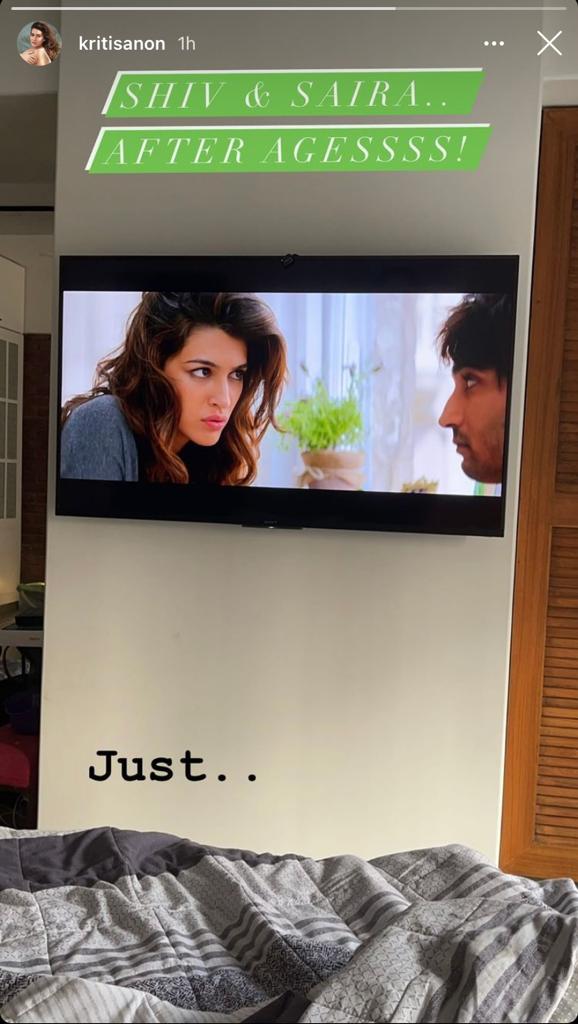 Meanwhile, the ‘Luka Chuppi’ star took to her verified Twitter handle to reveal her coronavirus diagnosis.

Kriti wrote, “I’d like to inform everyone that I have tested positive for COVID-19. There’s absolutely nothing to worry as I am feeling fine and have quarantined myself as per BMC and my doctor’s advice. So, I’m gonna ride this tide, rest it out and resume work soon. Till then, I’m reading all the warm wishes and they seem to be working. Be safe guys, the pandemic hasn’t gone yet!”

Kriti was in Chandigarh shooting with Rajkummar Rao for an upcoming film till last week.

Incidentally, Varun Dhawan and Neetu Kapoor also recently tested positive. They were in Chandigarh on an outdoor schedule for the film ‘Jug Jugg Jeeyo’.

Varun recently confirmed in social media that he had tested positive shooting for the film ‘Jug Jugg Jeeyo’ in the city. His co-star in the film Neetu Kapoor and the film`s director Raj Mehta also tested positive.