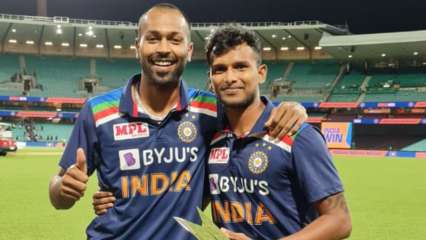 T Natarajan had a spectacular debut for the Indian cricket team against Australia in the three-match Twenty20 Internationals, taking six wickets in three games at an average of 13.8 and an economy rate of 6.91. T Natarajan emerged as the highest wicket-taker in the three-match series and was a fantastic asset for Virat Kohli’s team as they won the Twenty20 International series 2-1. Such was the performance of T Natarajan that Hardik Pandya and Virat Kohli gave the Man of the Series and Series trophies after the end of the third match at the Sydney Cricket Ground. However, Virat Kohli heaped more praise on T Natarajan by calling him ‘hard working’ and an ‘asset’ for the ICC World T20 2021.

Speaking in the post-match press conference, Virat Kohli said, “Special mention for T Natarajan, in the absence of (Mohammed) Shami and Jasprit (Bumrah), he stood out and really delivered under pressure. It is outstanding because he is playing his first few games at international level. He looks very composed, he is a humble and hardworking guy, he is sure of what he is doing.”

T Natarajan had an outstanding IPL 2020 for Sunrisers Hyderabad in which he impressed everyone with his yorker skills and his ability to bowl the right lengths in the death overs. Heading into the ICC World T20 in 2021 which will be played in India, Virat Kohli has said T Natarajan needs to work hard so that he can be an asset for the side heading into the marquee tournament.

“I hope he continues to keep working hard on his game and gets better because a left- arm bowler is an asset for any team and if he can keep bowling in this way consistently, it will be a great thing for us heading into the World Cup next year,” Kohli said.

India suffered their only loss in Twenty20 Internationals in 2020 after winning their previous 11 encounters. The series win in Australia came despite missing the services of Rohit Sharma, Mohammed Shami for two games as well as Jasprit Bumrah.

“We played good cricket over last 11-12 T20s, the fact that this squad had players that don’t have much exposure in international cricket, from that point of view it was a nice performance especially after losing first two ODIs. We came back nicely and showed belief. We carried the momentum, fighting back again in the first T20s and even tonight game was close, so the standout is that guys are not giving up,” Virat Kohli said.