A new photo of Ranbir Kapoor has been going viral on the internet. A man named Jubin Peter shared a photo of Ranbir posing with him, as they both were twinning in white.

He posted two photos – one solo with Ranbir and another selfie with his group of friends.

The picture has raised a lot of suspicion that the actor was at Alia Bhatt’s new home. The speculation came up after fans noticed a picture of Ranbir with his late father Rishi Kapoor. 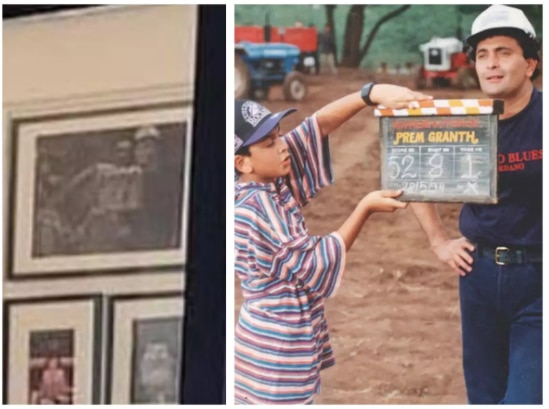 Not just Ranbir, but a photo of Alia Bhatt with her best friend Akanksha Ranjan Kapoor, was placed in the symmetary of frames in a wall. The wall, placed between two french windows, is visible in the background of latest viral photos of Ranbir Kapoor. Fans also spotted pictures of Mahesh Bhatt and Shaheen Bhatt. They also claimed to have seen a photo of Ranbir and Alia, where the ‘Brahmastra’ places a kiss on his girlfriend’s forehead.

Ranbir and Alia have reportedly turned neighbours. While Ranbir lives on the 7th floor in the same building, Alia opted for a plush apartment on the 5th floor.

The couple was reportedly going to get married in December 2020. After COVID-19 scare, it was then heard that they have postponed their wedding. The latest rumours are that the couple will be moving in together soon.

On the work front, Alia recently landed in Hyderabad for her upcoming movie ‘RRR’, directed by SS Rajamouli. Ranbir, on the other hand, is completing work on his pending movies like ‘Shamshera’.