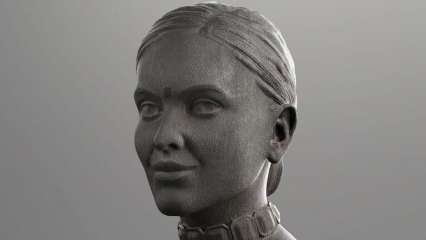 Deepika Padukone’s smile has made people go weak in their knees. Now, thanks to her smile, the actor has been featured at Athens International Airport. She has become a part of the exhibition named ‘The Authentic Smiles of People of the World’. This news has made Deepika fans around the world happiest as ever. The campaign has been put together when the Athens International Airport resumed welcoming guests after a break which was the result of COVID-19.

One of the fan clubs of Deepika posted the photo on their Instagram page with a caption stating, “Deepika Padukone is featured at Athens International Airport in an exhibition featuring The Authentic Smiles of People of The World.”

Check out the photo below:

The grey marble bust sculpture of the heroine is from her authentic India look in a saree while she dons a choker necklace and a small bindi, as the text below reads as “Indian Bollywood Actress smiles at Athens International Airport. Grey Marble, 2020 A.D.”

Meanwhile, on the work front, Deepika has around five films in her kitty. The actor will next be seen in Kabir Khan’s directorial ’83 which she is also co-producing. The film stars Ranveer Singh in the lead role.

DP is currently shooting for Shakun Batra directorial with Siddhant Chaturvedi and Ananya Panday. The film is of the neo-noir genre and marks their first outing together. The film is co-produced by Karan Johar under his home banner Dharma Productions.

Deepika will also be co-producing and starring in the Hindi remake of Hollywood film The Intern. She has also kickstarted Siddharth Anand directorial Pathan with Shah Rukh Khan and John Abraham.

The dimpled beauty will also be starring in Draupadi in which she plays the titular role and also co-producing it.