Television actor Divya Bhatnagar breathed her last on Monday after suffering a cardiac arrest. The ‘Yeh Rishta Kya Kehlata Hai’ star had been admitted to a hospital in Mumbai on November 26 after she was diagnosed with health complications.

Later, in the last week of November, after she contracted coronavirus and was diagnosed with pneumonia, she was put on ventilator after her health condition seemed to be deteriorating.

However, even after a lot of efforts, Divya could not survive. And the news of her demise, which was confirmed by Devoleena Bhattacharjee on Instagram, left the television industry in shock.

Among the many stars who took to the social media handle to extend their tribute to the late actor was Hina Khan, who had worked with Divya on ‘Yeh Rishta Kya Kehlata Hai’.

The ‘ex-Bigg Boss’ contestant, who has recently returned from her trip the Maldives expressed her shock over Divya‘s sudden and untimely demise.

Hina shared a note on her Instagram story and wrote, “Notice it, she says in her caption. This girl was Gold, full of life, such a beautiful person and a brilliant actor.. your sparkling eyes Divya.. you will be missed love.. your madness will be missed…We love you Gurl.. Rest in Peace. Praying for your peaceful passing. My condolences to your family and friends..” 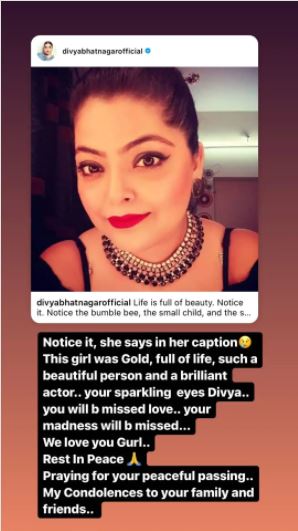 Meanwhile, in an exclusive interview to Times of India, Divya’s brother Devashish, who is inconsolable, opened up about the unbearable pain of losing his sister.

He said, “We were hoping that she would recover. My mother is heartbroken. I have to stay strong for her. This is a very difficult time for us and the pain is unbearable.”

Revealing that he plans to file a case against Divya’s estranged husband Gagan aka Gabru, Devashish told the publication, “Gagan started torturing Divya physically and mentally soon after their marriage. She had written a note on November 7, in which she had stated that Gagan tortures and abuses her. We found the note in her cupboard yesterday. She had also approached the police and filed an NC on November 16 against him, following an episode of domestic abuse. I had told her to stay strong when I got to talk to her during her hospitalisation.”

For the uninformed, in 2015, Divya got engaged to her long-time boyfriend and then finally married him after five years in December 2019. Gagan is also associated with showbiz and works for production houses making reality shows. He is into artiste management as well.

Reportedly, Divya’s parents were not happy with their relationship as it was an inter-caste marriage, however, the couple secretly tied a knot in a Gurudwara on December 22, 2019.