Actor Varun Dhawan, who on Monday confirmed and shared the news of him testing positive for novel coronavirus, has had enough of online trolls it seems.

Not someone who would usually react or reply to trolls, Varun gave a rather sharp reply to one social media user when the latter tried to troll him after the ‘Humpy Sharma Ki Dulhania’ actor revealed about testing positive for COVID-19.

Taking to the comments section of Varun’s Instagram post, one social media user wrote, “Bhai sahi mein hua hai na? Ya phir yahan bhi normal khaasi ki overacting kar raha hai (Brother, do you actually have it or are you just have a normal cough and you are overacting and pretending that you have Covid-19).” 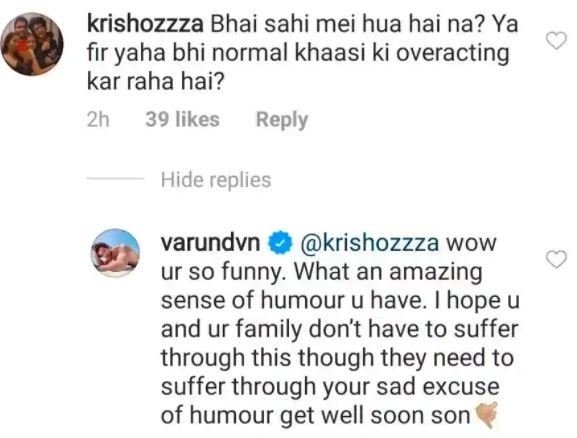 Varun later deleted the photo and shared another with the same caption that read, “So as I returned to work in the pandemic era I have contracted #covid_19 All precautions were taken by the production but still nothing is certain in life especially not covid-19. So please be extra careful I believe I could have been more careful. I see the get well soon messages and my spirits are high taking each day at a time thank u (sic).”

On Varun’s post, several film industry members and his friends wished the star a speedy recovery.

Varun Dhawan was in Chandigarh for the shooting of his upcoming film ‘Jug Jug ‘Jeeyo’ when he contracted the virus along with his co-stars Neetu Kapoor and Maniesh Paul. Actor Anil Kapoor has tested negative for the virus.

Meanwhile, talking about Varun, the actor is gearing up for the promotions of his soon-to-be-streamed film ‘Coolie No 1’ in which he is paired opposite Sara Ali Khan for the first time. The movie marks David Dhawan’s 45th directorial and will be out on Amazon Prime Video from December 25, 2020.