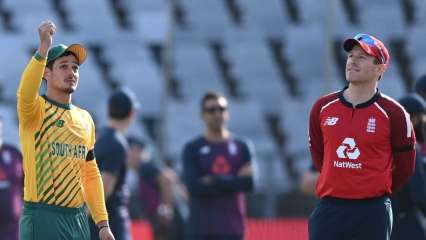 The One-day International series between South Africa and England stands cancelled after too many delays and postponements due to the rising cases of coronavirus, within the bubble.

The relase by the England Cricket Board said, “The decision was taken jointly by the two Boards to ensure the mental and physical health and welfare of players from both teams.

“CSA and the ECB will now work together to determine when the three-match series, which forms part of the ICC Cricket Men’s Super League, can take place in the future.,” the release added.

The ECB and CSA have agreed to postpone the remaining matches in the current men’s ODI Series.

After a South African player was tested COVID-19 positive, the first ODI, which was supposed to take place on Friday, December 4 was postponed to Sunday. However, the game on Sunday, was further delayed and later cancelled altogether after two unconfirmed positive reports in the English camp.

The second ODI, was also postponed due to the same reason after further rounds of testing took place.

Elaborating on the same, Cricket South Africa (CSA) Acting CEO, Kugandrie Govender said: “The concern over the mental health impact of recent events on all involved is not one that we as CSA or the ECB take lightly and the decision to postpone the tour is the most responsible and reasonable course of action for us.  “I would like to thank the ECB for the continued positive relations, and we look forward to hosting the England team in the near future.”

Ampyfying Govender’s views regarding the players’ welfare being their utmost priority, Tom Harrison, ECB Chief Executive Officer, said, “We have always maintained that the welfare of our players and management is paramount.

“We were concerned about the potential impact that recent developments might have on the wellbeing of the touring party, and so after consultation with Cricket South Africa, we have jointly made the decision to postpone the remaining matches in this Series, in the best interest of the players’ welfare.”

“I would like to thank Cricket South Africa for their support and understanding on this matter and look forward to working with them to identify a time when we can return to play these fixtures in the future,” he added further.