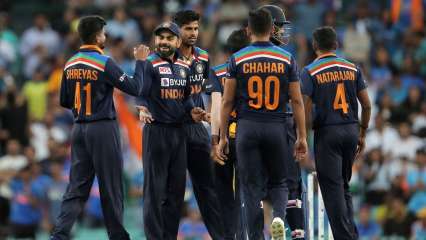 Hardik Pandya‘s 42*(22) helped India beat Australia in the second T20I of the three-match series in Sydney.

Carrying on his belligerent form from the IPL to the ODI series and now here in the shortest format for his country, Hardik was finding it difficult to time the ball well initially in his innings as the required rate was creeping up.

However, skipper Virat Kohli’s innings first and then a couple of good strikes from Shreyas Iyer helped him not to try anything stupid.

His clean hitting in the last two overs was enough for Team India to make mockery of the 195 target as India won the game with two balls and six wickets left.

Netizens celebrated the win heaping praise on Pandya, asking if he is the best finisher in this format of the game in the world. The users also applauded the all-round team performance as all the batters chipped in with useful contributions after T Natarajan’s outstanding spell of 2-20 while bowling.

Former cricketers Virender Sehwag, Sachin Tendulkar, Michael Vaughan too joined the fans on Twitter to praise Hardik and team India for the win.

Congratulations to #TeamIndia on winning the T20I series. Defending 161 in the 1st game and chasing 195 in the 2nd showed what a comprehensive performance this has been. Well done!@BCCI #AUSvIND

Zabardast hitting by @hardikpandya7 . Wonderful start from @SDhawan25 and @klrahul11 , @imVkohli and a sensational bowling spell from @Natarajan_91 . And India seal the T20 series with a game to go. Maza aa gaya. pic.twitter.com/VDgb6CwT33

Winning it in style with a six @hardikpandya7 what an inn.. well done team @BCCI for leading the series by 2-0 .. Go for 3-0

Sensational, Hardik Pandya. The composure to find his range in the last two overs when he wasn’t middling it before that…that’s just elite T20 batting.#AUSvIND

For much of his knock, Pandya struggled. Couldn’t get the timing right. But then the way he came to party to finish the match off was unreal. He has just reached a new level. Right now, he is in a different zone.

Hardik Pandya is a proper modern day T20 cricketer who has practiced range and six hitting for a long time and has now mastered it. Clarity of role helps. This could be a future template for a lot of cricketers to make a name. #AUSvsIND

Babar Azam, Imam-ul-Haq ruled out of first test, THIS player to...