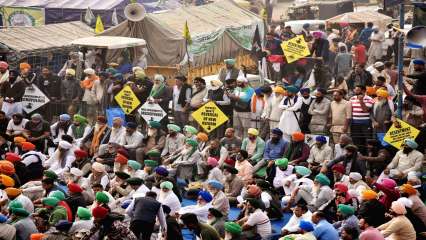 Farmers in India have the right to demonstrate peacefully and authorities should let them do so, spokesperson for UN Secretary-General Antonio Guterres said on the farmers’ protests in India.

“We want to see people have a voice in their lives,” Stephane Dujarric, Spokesman for the Secretary-General said on Friday at his daily briefing when a reporter asked about the ongoing farmers’ protests against the agriculture reform laws introduced by the Indian government.

“What I would say to you is what I’ve said to others when raising these issues is that people have a right to demonstrate peacefully, and authorities need to let them do so,” he added.

Reacting to the comments by the foreign leaders, External Affairs Ministry Spokesperson Anurag Srivastava on Tuesday said, “We have seen some ill-informed comments relating to farmers in India. Such comments are unwarranted, especially when pertaining to the internal affairs of a democratic country.”

In a terse message, the ministry further added that “It is also best that diplomatic conversations are not misrepresented for political purposes.”

On Friday, India summoned Canadian High Commissioner and told him that the comments made by Prime Minister Justin Trudeau and others in his Cabinet on the farmers’ protest constituted an “unacceptable interference” in the country’s internal affairs and these actions, if continued, will have a “seriously damaging” impact on the bilateral ties.

Farmers have been sitting on protest for the last nine days at the Delhi-Haryana and Delhi-Uttar Pradesh borders. The agitated farmers are demanding the repeal of the three farm laws passed by Parliament earlier this year and have expressed apprehension that they would pave the way for the dismantling of the minimum support price system, leaving them at the mercy of big corporate houses.

The government has maintained that the new laws will provide farmers with better opportunities. It has also accused the opposition parties of misleading farmers.