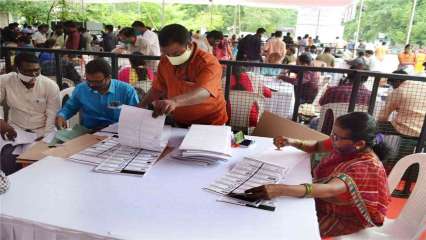 Even though Telangana Rashtra Samithi retained control of the city civic body in Hyderabad on Saturday, BJP registered its emergence as a major force in Telangana by bagging 48 seats.

It is to be noted that in the last GHMC election, the Telangana Rashtra Samithi won in 99 wards. AIMIM bagged 44, with the BJP winning only four seats. The BJP made significant strides in this year’s Greater Hyderabad Municipal Corporation, and this would come as spectacular news for BJP party workers.

BJP has emerged as the second-largest party, improving its share of seats and votes by nearly ten times.

In the run-up to the elections, TRS has time and again stated that AIMIM is the biggest rival and not BJP. Yet, the latter managed to win more seats than the former. It now seems that BJP has taken the position of formidable opposition, and emerge as an alternative to TRS.

He expressed his gratitude to the people of Hyderabad who chose his party Telangana Rashtra Samithi (TRS) and made it the single largest party to represent them in Greater Hyderabad Muncipal Corporation (GHMC).

The mayor’s post is reserved for a woman this time. Elections were conducted with ballot papers in view of the COVID-19 pandemic.

The counting of votes for the Greater Hyderabad Municipal Corporation (GHMC) election began on Friday morning.

In the latest polls city witnessed a triangular contest among the ruling TRS, the AIMIM and the BJP, which recently bagged the Dubbak Assembly seat in a recent by-poll. The top brass in the BJP, including Uttar Pradesh Chief Minister Yogi Adityanath, National President JP Nadda and Union Minister Amit Shah have campaigned for this election.

FAU-G is at big advantage over PUBG Mobile India even before...

Increase in ceasefire violations by Pak along LoC; heavy artillery being...