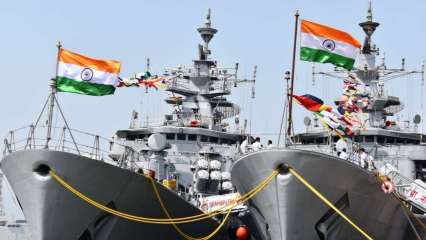 Every year, December 4 is celebrated as Navy Day. If you’re wondering why this day has a significant value for the maritime forces, read on.

The day celebrates the strength and bravery of the navy men who brought victory to the country in 1971 Indo-Pak War. On December 3, 1971, the attack by Pakistan on India’s airfields along the border areas led to the second war between India and Pakistan.

INS Nipat, INS Nirghat and INS Veer were involved in the attack.

The 90-minute long operation began on December 4, 1971. Around 2 pm, the fleet of Indian Navy sailed towards Pakistani waters from Gujarat’s Okha Port.

Our men reached about 70 miles south of Karachi when the Indian Navy fleet realised that an enemy vessel was closing in. The assault lasted for more than an hour. India fired total six missiles. Not only the Indian Navy fleet sank four Pakistani vessels but also returned without the loss of a single man.

With no casualties on the Indian side, this operation was considered to be one of the most successful in modern naval history post-World War II.

To mark the magnificent display of valour, the Navy Day is celebrated on December 4 every year.