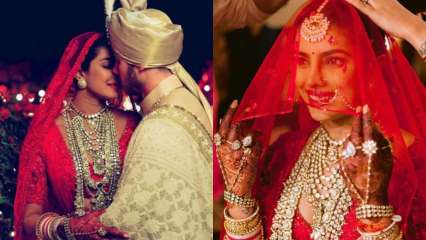 On Wednesday, global star and Bollywood actress Priyanka Chopra, who is celebrating her second anniversary with husband Nick Jonas, treated her fans with a set of unseen photos from her Hindu wedding ceremony.

The duo tied the knot in a lavish ceremony at Jodhpur’s Umaid Bhavan Palace in 2018, in dual ceremonies — Christian and Hindu.

On November 30, the couple celebrated their second marriage anniversary and wished each other with loving posts on Instagram. And now, taking to her social media handle yet again, the ‘Baywatch’ actress has shared a few pictures from their Hindu marriage ceremony and captioned it, “2 years down… forever to go @nickjonas (sic).” She followed the caption with a heart emoji.

In the first photo, the couple can be seen holding each other rather closely while posing for the capture. The second photo is a close-up of their hands, the third image shows Priyanka dressed in her elegant red bridal lehenga looking onward as she adjusts her long veil. The fourth photo is a side profile of the actress her walking towards the ‘mandap’ as she puts her custom-made exquisite lehenga at full display, and the final picture shows a large, happy crowd during the ‘varmala’ ceremony.

Nick too shared a few photos and wished Priyanka a happy Hindu marriage anniversary, He wrote, “Two days, two weddings now two years. I was so honored to get to marry @priyankachopra in her home country, in a traditional Hindu wedding. I can’t believe how lucky I am, and how quickly the time has gone by. Happy Hindu anniversary beautiful (sic).”

Take a look at the pictures Priyanka and NIck posted here:

Earlier, on Priyanka and her pop star husband Nick took to social media to express love for each other, on their second wedding anniversary on Tuesday.

“Two years married to the most wonderful, inspiring and beautiful woman. Happy anniversary @priyankachopra I love you,” Nick posted on Instagram along with their photos from their white wedding ceremony.

Priyanka replied to his post saying: “I love you meri jaan.”

She took to Twitter to post a photo of them walking hand in hand and captioned it, “Happy 2 year anniversary to the love of my life. Always by my side. My strength. My weakness. My all. I love you @nickjonas.”

The two have often shown their romantic side on social media.

Last month, Priyanka shared a couple of photographs of her Karwa Chauth celebrations with Nick.

The actress is currently shooting for “Text For You”, which also stars Celine Dion and Sam Heughan.