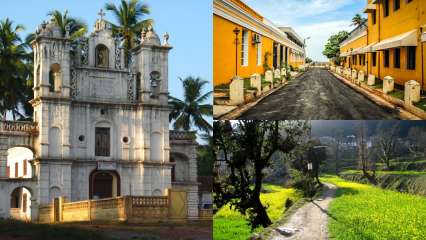 With several celebrities jetting off to international locations such as the Maldives, Dubai or even closer home to Dharamshala or Goa for a break from the isolation that the coronavirus pandemic has forced us into this year, the need to travel and explore as much as the is need to relax and free the mind of the stress and negativity 2020 has brought upon on citizens across the globe, seems more important than ever. But, since the pandemic is ongoing, it seems unlikely that travelling will be on the cards for many in the next couple of months, given the current situation of the cases in the country.

However, for those who wish to travel and reconnect with some amazing international cultures closer to home, when it is safe to do so, here’s a list of destinations curated by travel platform Booking.com, that will give you details about places you can explore.

Dharamkot – Tel Aviv of the hills

Located 5 km away from Dharamshala, Dharamkot is often referred to as the Indian ‘Tel Aviv of the hills’. With the number of hand-painted Hebrew signages that dot the area, Dharamkot offers the vibe of an Israeli settlement. The village also has a Chabad House in the centre (Jewish community centre) where Israelis gather in the evening and residents also host an annual community feast for the Israelis to mark Rosh Hashanah—the Jewish new year. The Israeli settlement serves authentic delicacies, and if you wish to indulge in some authentic cuisine, make sure you try the jachnun, shakshuka and falafel with hummus, the common fare at most of the local restaurants.

Bylakuppe, a town in the Mysuru district of Karnataka is the second largest Tibetan settlement in the world outside of Tibet, after Dharamshala. Often referred to as the ‘Little Tibet of India’, Bylakuppe has several monasteries and temples showcasing Tibetan Buddhist traditions. When it is safe to travel, one can visit the notable Sera Monastery and the TashiLhunpo Monastery (both in the Gelug tradition) and Namdroling Monastery (in the Nyingma tradition) to get a taste of Tibetian culture. Bylakuppe also has many Buddhist universities for advanced Buddhist practices.

Formerly a Portuguese colony, Goa’s Portuguese influence is reflected in the various monuments, churches, architecture and embedded in the culture of the city today. Known for nightlife and beaches, one can also imbibe the Portuguese culture by visiting monuments and churches in Goa that showcase beautiful European architecture like the ‘Church of Saint Francis of Assisi’, the famous Roman Catholic Church constructed by eight Portuguese Franciscan friars and known for its beautiful architecture. One can also plan a day trip to the historical Fort Aguada which was constructed by Portuguese colonial rulers in 1612 to protect old Goa from the attacks of the Marathas and Dutch. There are various Portuguese cafes in Goa that serve authentic dishes.

Puducherry – the French colony of India

Puducherry was once the largest French colony in India until 1954. Today, the white town of Puducherry gives us a close sense of the French culture which is why it is called the ‘Little French Town in India.’ While in Puducherry, the French Colony – which was developed and created by the French – is a must-visit. The French Colony has a typical classic, vintage French colonial style with majestic buildings. Many residents here are French citizens, the streets have French names, the residents speak French and there are restaurants and cafes serving French food. You can also visit The Botanical Garden, Pondicherry Museum, French War Memorial during your stay.

When Vasco Da Gama established a sea route to Kerala in 1498, it marked the era of Portuguese colonisation in India. Glimpses of Portuguese architecture and culture are prevalent in Kochi even today. From Fort Emmanuel, a ruined fort which is a symbol of the strategic alliance between the Maharaja of Kochi and the Monarch of Portugal, to the Pallipuram Fort built by the Portuguese in 1503 and is the oldest existing European fort in India, there is a lot for travellers to visit and soak in. One can also try authentic Portuguese cuisine at Oceanos Restaurant or visit the Indo Portuguese Museum while on a holiday to Kochi or participate in the Cochin Carnival, a celebration of the Portuguese New Year that is held at Fort Kochi every year in December.

Anushka Sharma is epitome of beauty in her maternity photoshoot