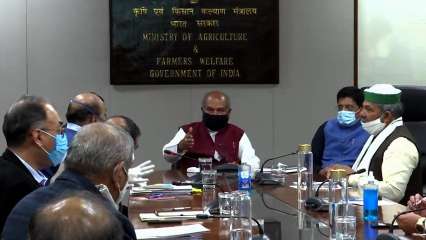 The government and representatives of thousands of protesting farmers failed to break a deadlock over a set of new farm laws at a meeting on Tuesday, but both sides were set to meet again on Thursday. While the government offered to constitute a committee to look into the demands of farmers agitating against the new farm laws, it received a cold response from representatives of the agitating organizations. The farmers are demanding the repeal of all three new agricultural laws.

The meeting was held at Vigyan Bhawan between representatives of farmer organizations and Union Minister of Agriculture, Narendra Singh Tomar, along with Minister of Railways and Commerce and Industry Piyush Goyal and Minister of State for Commerce Som Prakash (who is an MP from Punjab).

Here’s what happened in the meeting between the farmers and the government.

Representatives who attended the meeting on behalf of the agitating farmers demanded that the three new agricultural laws should be repealed. They called these laws against the interest of the farming community and said that the formation of a committee was useless. They said that the government is not trying to resolve the issue but to avoid it. They demanded that the MSP be given a written legal form. They also added that they are not running away from the dialogue, but the movement will continue till a solution is found.

What did the government say?

On behalf of the government, it was said that the farmers should write down the flaws found in the bill in a sequential manner. Bring flaws to the next meeting and then it will be discussed. The government wants a committee to be formed, consisting of 5 to 6 representatives of the farmers and also having officers, agricultural experts. The government also says that all the three bills are in the interest of the farmers, yet if the farmers feel there are flaws in the bill, then they should bring it in writing. The next meeting will be held on December 3 (Thursday).

Try to convince the farmers

During the meeting between the farmers and the government, a presentation was made on behalf of the government regarding the three agricultural laws. The farmer leaders were given full information that nowhere in the bill has it been said that the MSP and the mandi are ending. However, the farmers say that they have seen what was shown in the presentation and they should talk about things further to it.

The meeting was not completely inconclusive

Overall, it cannot be said that the meeting was inconclusive. Rather, there was a dialogue between the two sides. The conversation took place. Both sides came to the table. Both sides are ready for further talks.

In the meeting, a representative of a farmers organization said that you have brought such a law, which will take our land to big corporates. Now is not the time to form a committee. You say that you want to do good to the farmers, we are saying do not do good to us. In the meeting, representative of another farmers organization said that farmers are on the streets against agricultural laws and demanded that the government should consider withdrawing it.

The government is constantly saying that the new laws will provide better opportunities to the farmers and they will introduce new technologies in agriculture. Hours before the meeting, farmers’ protests against the Center’s new agrarian reform laws were discussed in detail between Union Ministers Rajnath Singh, Amit Shah, Tomar and Goyal, BJP chief JP Nadda.

Farmers of Punjab and Haryana are going on a peaceful strike at the Singhu and Tikari borders of Delhi. Protesting farmers also gathered on the Ghazipur border adjoining Uttar Pradesh on Monday.