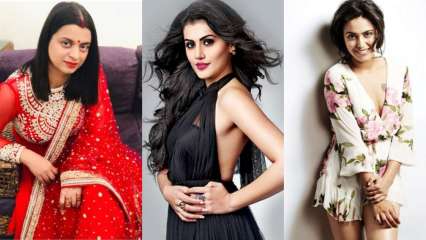 On November 27, in a major relief for Bollywood actress Kangana Ranaut, the Bombay High Court quashed the BMC’s demolition notice and subsequent action to undertake partial demolition at her Bandra bungalow in September and ordered suitable compensation to her.

After the High Court’s verdict came, subsequently Kangana put out a video hailing the order and terming it as a winning moment for India’s democracy.

And now, on Saturday, Kangana’s sister Rangoli Chandel has hit out at actresses Swara Bhasker and Taapsee Pannu calling them ‘frustrated jealous and simply B grade women’ who laughed and mocked at Kangana’s demolished house.

Rangoli added she can drag them to court for apparently calling the demolition legal but added that Kangana did not want any action against them. She further urged her fans to not believe anything the two actresses endorsed about Kangana.

Meanwhile, on Friday, a Division Bench comprising Justices SJ Kathawalla and RI Chagla said that Ranaut can take steps to get regularised her property and make it habitable. The court directed that if Ranaut makes an application for getting her building plans approved, it would be decided within 4 weeks.

Reserving its order on the quantum of compensation payable to the actress, the court, appointed a valuer to decide on the compensation amount.

The court said that the BMC proceeded on “wrongful grounds” in the case that was against the citizens’ rights, malice in law and reactionary in nature.

Mumbai Mayor Kishori Pednekar said that she would comment after consulting the BMC Legal Department but declined to say whether it would challenge the High Court ruling in the Supreme Court.

The Opposition Bharatiya Janata Party leaders like Kirit Somaiya and Ram Kadam welcomed the court verdict and slammed the BMC, Municipal Commissioner IS Chahal, Chief Minister Uddhav Thackeray and Maha Vikas Aghadi government, saying it was a big blow to them and demanded the Mayor’s resignation.

A BMC team had undertaken partial demolition at Ranaut’s bungalow on September 9, which sparked off massive political furore after which she moved the Bombay HC to challenge the civic body’s move, terming it a vendetta.