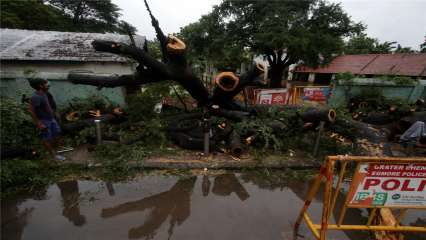 The cyclone began its landfall on Wednesday night about 10.30 p.m. after moving at a speed of 16 kmph for six hours. According to the weather department, Nivar crossed the coasts between 11.30 pm on November 25 and 2.30 am on November 26.

Even after landfall, the system is likely to maintain its cyclone intensity for about six hours and weaken gradually. The sea along the coast is very rough with huge waves hitting the shores.

On its way, the cyclone uprooted several trees in Tamil Nadu’s Cuddalore district.According to the weather department the cyclone lays centered over coastal Tamil Nadu and Puducherry about 25km north of Puducherry with wind blowing at a speed of 90-100 kmph gusting to 110 kmph.

Under its influence rainfall at most/many places with heavy to very heavy falls at a few places with isolated extremely heavy falls likely to occur over Ranipet, Tiruvannamalai, Tirupattur, Vellore districts of Tamilnadu and Chittoor, Kurnool, Prakasam and Cuddappa districts of Andhra Pradesh on November 26.

Authorities in Tamil Nadu and Puducherry have taken a slew of measures to handle the situation arising out of the cyclonic storm, which has led to heavy rainfall in several regions.Over one lakh people have been taken to safety from coastal areas and power supply disconnected in vulnerable areas as a precautionary measure.

The Puducherry government too has announced Thursday as public holiday.

Twenty-five teams from National Disaster Response Force (NDRF) have been deployed on the coastal areas of Tamil Nadu, Puducherry and Andhra Pradesh.