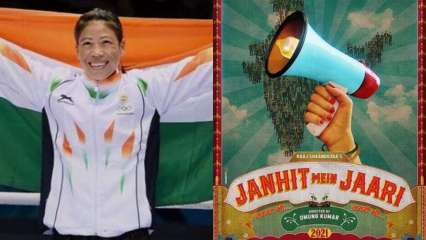 Boxing champion MC Mary Kom took to Twitter on Wednesday to announce the next film of Omung Kumar, who had helmed the 2014 Priyanka Chopra-starrer that was based on her life.

Omung Kumar’s new film is titled ‘Janhit Mein Jaari’, and is set to go on floors in March 2021.

The film’s poster focuses on a woman’s hand holding a megaphone, with the map of India formed by humans in the background. Mary tweeted the poster and wrote: “Ek womaniya sab pe bhaari… ye soochna hai #JanhitMeinJaari! I’m looking forward to this film, it’s such an interesting concept.”

The director replied saying: “Thank you so much Mary.”

Actors Nushrratt Bharuccha and Pavail Gulati star in the quirky comedy that aims at delivering a message as well as entertain.

‘Dream Girl’ director Raaj Shaandilyaa has written the story of the film, which is set to release in 2021.