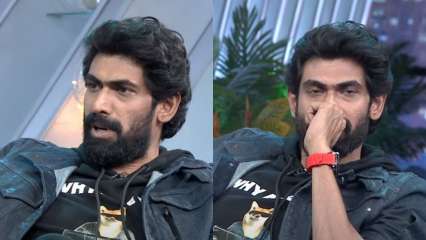 South star Rana Daggubati, who had earlier denied suffering from any severe illness, has finally opened up about the same on celebrity actor Samantha Akkineni‘s talk show, Sam Jam.

A story of a true warrior, if one could call him that, Rana overcame critical health conditions, that he mentions, could have led to his death. For the uninitiated, last year picture of the star looking extremely weak had spread on the internet that worried fans about his health condition.

More recently, when the ‘Baahubali’ star shared a photo of himself looking lean, it made the fans worry about his health. However, taking to Twitter, he gave an update and wrote, “Hearing lots of strange things about my health, I’m fine guys just some BP based issues I’m addressing. Will be fixed and sorted soon. Thanks for the concern and love but don’t speculate it’s my health, not yours ;).”

In a promotional video released before the show airs, for the first time ever, Rana spoke about his illnesses and broke down into tears as memories of the tough times flashed back while he was speaking. About his tryst with his critical health condition that could have led to his premature death, Rana said, “When life was on a fast forward, there was suddenly a pause button. There was bp, calcification around the heart and you have failed kidneys…It could have been a 70 per cent chance of stroke or haemorrhage and a 30 per cent chance of death straight.”

After Rana got emotional, Samantha averred, “We were crumbling around you, but you were like this rock. I have seen this in front of me, that is why he is like a superhero to me.”

Meanwhile, there were reports that suggested Rana was set to undergo a kidney transplant. However, the Baahubali dismissed the kidney transplant rumours and told news agency IANS in an interview, “I think there was enough speculated about it and I am tired of clarifying that I am absolutely fine and healthy. So, I think rumours about my health are now a boring topic. Whenever I leave Hyderabad, people get apprehensive, but I am thankful for the love and the concern people have been showering on me.”

Earlier, in August, the actor married his longtime girlfriend Miheeka Bajaj and pictures of it went viral on the internet.

I am recovering. Will be back soon: ‘Aashiqui’ actor Rahul Roy

Highlights and achievements of DGPs, IGPs conference since 2014