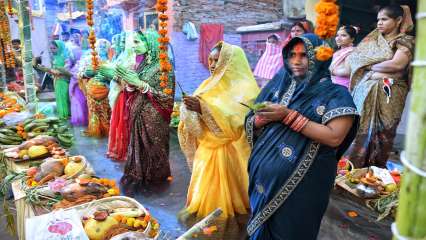 The Chhath Maha Parv of public faith and Lord Bhaskar concluded with the rising sun on Saturday morning. The festival also gave us a steller example of religious harmony in Bihar.

In Bhagalpur, a Muslim family built a small water pool for Chhath in the courtyard of their house, where more than 50 devotees paid their arghya (water tribute) to Lord Bhaskar.

In the corona era, organisers of the festival had to face a number of difficulties. The government appealed to the people to celebrate Chhath Parv at home instead of going to ghats. After this appeal, due to shortage of reservoirs and lack of water bodies in many areas, many devotees had difficulty carrying out the customary water tribute to the rising sun to break their fast.

Realising these difficulties, a Muslim youth from Bhagalpur dug a small pond (jalkund) in his courtyard itself.

Muzaffar Ahmad set an example of mutual harmony in society by constructing a water pool in the courtyard of his house for the benefit of devotees in his neighbourhood.

Ahmad told IANS, “Chhath is a festival of social harmony, so I built the water pool. My thinking was not to disturb those keeping a fast even in the pandemic. I am happy that my hard work was of some use to the devout keeping a fast during the festival.”

The women who arrived at Ahmad`s house said that there was a ban on coverging at the ghats this time as per the guidelines of Covid-19. At this time, their Muslim brother has come to their aid.

Sadhana Devi says that there was no reservoir in the congested neighbourhood. Many houses don`t even have a proper roof. “We also had difficulty in going to Ganga ghat due to Corona. We are grateful fot Ahmad Saheb to solve these issues.”

During the Chhath festival, the boundaries of caste and religion fade into the background. “The people of every religion have equal faith in the Chhath festival. In Bihar and Jharkhand, many Muslim families have been participating in Chhath festivals for years together. Deeds like these send out a great message of social harmony and unity,” says Ahmad.

How India transformed from a spin-heavy to a feared pace bowling...