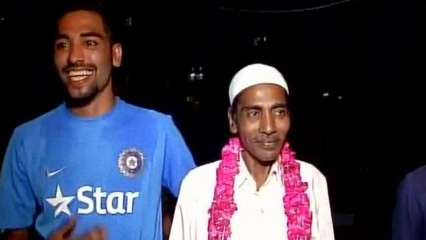 Mohammed Siraj, who is in the Indian cricket team for the Test series against Australia, suffered a tragedy on Friday after his father, Mohammed Ghouse, died due to a lung ailment. Mohammed Siraj’s father was 53. Mohammed Siraj only came to know the news of his father’s death when he had finished the practice session at Sydney’s Blacktown Oval. However, what is even sadder is that Mohammed Siraj will not be able to make it to India for the last rites as he is in Australia and the coronavirus restrictions are in place. The Indian squad, currently in the middle of a 14-day quarantine period, has been training in isolation on the outskirts of the city of Sydney after arriving to the country on November 13.

Speaking to Sportstar, Mohammed Siraj has said Virat Kohli and coach Ravi Shastri have offered him tremendous support. “My dad’s wish was always this – mera beta, desh ka naam roshan karna (my son, you should make my country proud). And, I will do that for sure. know what kind of hardship my dad faced in my early days driving an auto rickshaw to let me pursue my passion for the game. It is shocking. I lost the biggest support of my life. It was his dream to see me play for the country and I am glad that way I could realise that and bring joy for him. The coach Shastri Sir and captain Virat Kohli were informed about the news. They just told me to be bold and are lending all the support,” Siraj said.

Royal Challengers Bangalore, the franchise that Mohammed Siraj represented during IPL 2020, also put out a heartfelt tweet. “Our heartfelt prayers and condolences go out to Mohammed Siraj & his family, on the loss of his father. The entire RCB family is with you during this difficult time. Stay strong, Miyan,” the franchise tweeted.

The son of an autorickshaw driver was now on the fast lane to success. Under the mentorship of Ashish Nehra, Bhuvneshwar Kumar and VVS Laxman, Mohammed Siraj took his baby steps to bowling superstardom but it did not materialise. In 2017/18, Mohammed Siraj topped the bowling charts with 23 wickets in seven games in the Vijay Hazare Trophy after being released by Sunrisers Hyderabad in 2018. The exploits in the Vijay Hazare Trophy helped find a new home and that was Virat Kohli’s Royal Challengers Bangalore.

In the game against Kolkata Knight Riders, Mohammed Siraj delivered the spell of the ages that silenced all the years of criticism in one blow. Siraj became the first bowler in IPL history to bowl two maiden overs and he ended with figures of 4-2-8-3.

World bids goodbye to 2020 amid fireworks over empty streets