The Maldives seems to be a favourite holiday destination for B-town celebrities considering how one-after-another stars are jetting off to the island nation.

After Tiger Shroff-Disha Patani, Farhan Akhtar-Shabani Dandekar, Aadar Jain-Tara Sutaria, Neha Dhupia-Angad Bedi, the next film star to jet off to the Maldives was Rakulpreet Singh, who was spotted at the airport on Thursday morning with her family including her mom and dad.

And now, after having reached her luxurious resort and unpacked for the stay, the actress is in a mood to le her “spirit fly”.

Taking to her Instagram handle, Rakulpreet let her fans know about her relaxed mood by sharing a stunning photo, soaking in the sun in the exotic location. In the photo, the ‘De Dana Dan’ actor can be seen sporting an emerald green monokini by Esha Lal Swimwear and a coverup from Péro. She left there hair open in waves and was snapped barefoot as she posed on the deck of her water-bungalow.

Rakulpreet captioned the picture as, “Smell the sea , feel the sky , let your soul and spirit fly #holidaytime #selflove #waterbaby.” 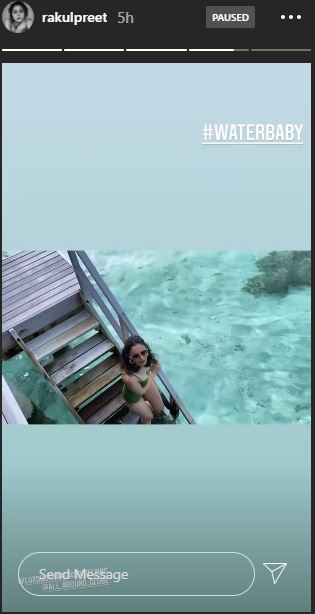 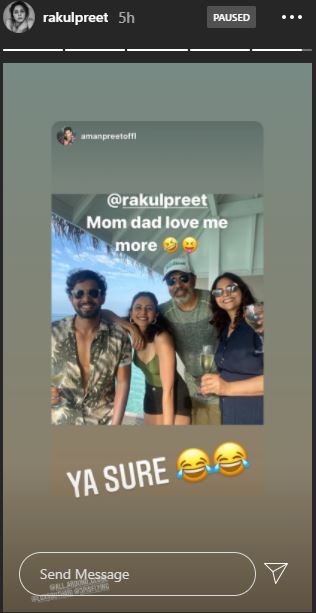 Meanwhile, on the work front, Rakulpreet will be seen next in Ajay Devgn’s ‘Mayday’.

Megastar Amitabh Bachchan will also play a lead role in the film. Sharing her excitement on being a part of ‘Mayday’, Rakulpreet Singh wrote, “Can’t express how thrilled iam to be on board ( literally Squinting face with tongue) as a copilot in #MAYDAY. It’s a dream come true to work with @SrBachchan sir. @ajaydevgn thankyouuu and preparing for takeoff (sic).”