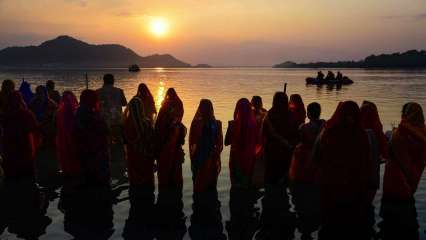 This means that Chatt Puja will not be conducted at two prominent places in Kolkata—Rabindra Sarovar and Subhas Sarovar.

The court has refused to allow the Chhath Puja rituals at Subhas Sarobar in the eastern part of Kolkata, rejecting a modification application by the West Bengal government.

Justices Sanjib Banerjee and Arijit Banerjee rejected the state government’s application, observing that apart from the pollution of the water body, there are concerns about coronavirus-related health issues.

It is to be noted that the state government on Thursday moved the high court, seeking modification of its November 10 order banning Chhath Puja rituals at the two lakes.

The division bench had on November 10 ordered a complete ban on firecrackers throughout West Bengal for the remainder of the month of November, and certain other directions were issued in respect of Kali Puja and Chhath Puja festivities.

The NGT had ordered a ban on such rituals at Rabindra Sarobar to prevent pollution of the waterbody in southern Kolkata.

The civic authorities in Kolkata have set up several temporary ghats near 16 waterbodies in the city to avoid crowding during Chhath puja celebrations this week, an official told news agency PTI on Wednesday.

At least 44 temporary ghats have been erected along the waterbodies in Kasba, Anandapur, Jadavpur, Patuli belts of the metropolis, the Kolkata Municipal Corporation (KMC) official had told PTI.

Apart from that, two large artificial brick-made pools have been arranged in Deshapriyo Park and Chetla-Rashbehari Avenue areas to enable devotees to perform rituals on the occasion of Chhath, he had added.

Datesheet to be announced later, practical papers when schools reopen