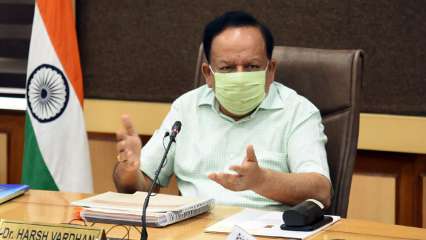 As the world is waiting with bated breath for a COVID-19 vaccine, the Union Health Minister on Wednesday spoke on three important matters-the COVID-19 vaccine, another lockdown in Delhi and funds given to the Delhi government to combat the deadly pandemic. He said that the central government is keeping a close watch on Delhi’s situation and will provide all necessary help.

In an exclusive interview with Zee News, Dr Harsh Vardhan talked about why the cases are increasing in the national capital at a time when it is decreasing in other parts of the country. The minister said that the first and most important thing which needs to be understood is that the lockdown was imposed before and then unlock was issued as the people were suffering during the lockdown. A big reduction in the number of cases and deaths was achieved during that time and the process of unlocking was implemented to maintain balance in the society, he added.

Vardhan said, “People were asked to return to their routines slowly but not to do away with precaution. Sadly in the context of Delhi, the cases were increasing with up to 8,000 cases per day. I think this will be the highest in the 11-month period, so everyone is most worried about Delhi.”

“The central government is worried. Earlier, when the situation was grim in Delhi, Prime Minister Narendra Modi had asked Home Minister Amit Shah and the Health Minister to plan and work with the people of Delhi, to guide and monitor them. We gave all the support whatever needed to control the curve and the result was also seen that the situation in Delhi had improved,” he said.

He added, “Now again the situation in the country is getting better but the situation in Delhi is getting worse. So the Centre has again taken the initiative and the Home Minister has called the meeting again and asked Delhi Chief Minister Arvind Kejriwal and the Delhi Governor to take all the required steps.”

Speaking on the availability of the COVID-19 vaccine, he said, “I am confident that the vaccine will be ready by early next year. We have been preparing for the last two-three months on the group to whom we will give the vaccine first is being arranged. By June-July-August 2021, we are preparing complete modernities to give vaccines to 25 to 30 crore people. We provide vaccine to crores of children in one day, the whole system is there, the government is fully using the old experience and a solid strategy is also being prepared.”

“Vaccine trials are taking place in many places in the world, the results are coming and they are promoting it. Two vaccines of India have also reached the third stage of clinical trials and in the coming few days, in the near future, they will be ready and people will get it in 2021,” he asserted.

Speaking on the initiative and steps taken by the Centre, the Health Minister said that ICMR is making all the necessary arrangements. “The beds in ICU are being increased, more doctors and nurses are being provided, the retired doctors and nurses of AIIMS have also been asked to be made available and a more vigilant eye have been asked to be kept on the ICU and quarantine situation. A re-survey in Delhi should be done in case of quarantine, the status of beds and ICU.”

He added, “The Prime Minister has also said in the past that in any case, do not leave the appropriate behaviour to defeat COVID-19. The government is constantly saying that your mask, social distancing and hand sanitizing are the biggest social vaccine to protect against coronavirus. This situation happened in Delhi before too.”

“For the first time when we reviewed the situation in Delhi, a few months ago, five to six thousand tests were being done and now we got it increased to 20,000-25,000. Now when we have reviewed the situation in Delhi again, we feel that there is a need for an increase in testing, and probably not the same amount of testing was happening in Delhi. There should be a lot of intervention with sharp eyes and there was a need for more strengthening,” he added.

On the fund given to the Arvind Kejriwal government, he said, “We have given sufficient amount of money to the Delhi government and if they will give the account of it, then they can receive more money. PPE, N95 mask and ventilator, whatever is needed they can tell us we have given before and we are ready to give again. It has been said in the meeting.”

“There is no question of my personal opinion about the lockdown in Delhi, the entire country has already been through the lockdown. The thing that will benefit the most now is COVID-19 appropriate behaviour,” he added.

On implementing COVID-19 protocols, he said, “I understand that many state governments are doing it very well like the Chief Minister of Uttarakhand told in the meeting that the state government is issuing challans and giving masks as well. I think the steps like this are different.”

On the situation in Delhi he said, “I think whatever is the situation in Delhi, there is a need for more disciplined behaviour inside the society. Home Ministry is holding a meeting in detail about this, right now. At weddings, 50 people have been given permission from 200. But I personally do not feel the need for extensive lockdown repetition in Delhi.”

“Coronavirus is decreasing in the country. We have increased the testing and 10-15 lakh tests are being done every day. The recovery rate has been more than 93 per cent, the situation has come under control even in the states where the maximum number of cases were coming, we have advised those states which needed to be improved,” he added.

On Chhath Puja he said, “I will not comment on the ban on Chhath but I think it is most important to follow the appropriate behaviour. Religious feelings of people are in right and they should also be able to fulfil and satisfy that with great enthusiasm. But during COVID-19, the precautions must be taken very seriously and deeply.”

The last few months, worldwide, have witnessed more than 5.5 crore people in the grip of the virus including 13 lakh deaths. India has so far registered over 88 lakh cases.

PUBG Mobile bans over 21 lakh accounts for hacking, here’s how...