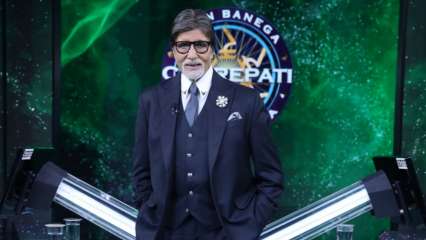 It wouldn’t be wrong to say that even at 78, megastar Amitabh Bachchan is extremely charming and personifies good looks. And with the kind of charismatic personality that he is, fans are always intrigued to know more about his personal and professional life. And it’s his and Jaya Bachchan’s love story that fans want to know and talk about more and more.

So, when the ‘Paa’ actor, who is currently hosting popular game show Kaun Banega Crorepati (KBC 12), came face to face with a contestant Yogesh Panday, who asked the show host for some expert advice on companionship, Big B disclosed something which we didn’t know up until now.

When Panday jokingly asked Amitabh Bachchan if he ever wrote love letters to Jaya Bachchan, the former nodded in affirmation and went on to reveal that he wrote tons of letters to his ladylove as a way to express his love and adoration.

But that wasn’t all. Big B had more to talk about. He went on to speak about how they fell deeply in love and ended up tying the knot.

He said, that while they were filming together for a move, Jaya and he decided that if the film performed well at the box-office they would take a trip abroad along with a few other friends.

And when the time came and the film performed well, Amitabh sought his father Harivansh Rai Bachchan’s permission. Big B went on to reveal that he was quizzed by his father about Jaya and that the only condition on which his father allowed him to take a trip with his ladylove was to get married to her. And so, he tied the knot with his ladylove Jaya, whom he already adored.

Thanks to KBC 12, dinner time conversations have become fun with lots of knowledge also coming across by way of the game show that presents some fantastic questions that many would not know answers to.

However, this season has so far seen two women become crorepatis, Nazim Nasim and IPS officer Mohita Sharma both left the show with the sum of Rs 1 crore each.