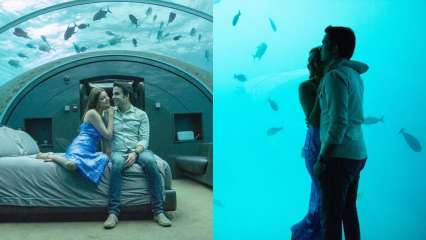 The newly-weds Kajal Aggarwal and Gautam Kitchlu are spending their honeymoon in the most romantic way possible! They have been waking up underwater in their Maldives resort.

In a photo, Kajal was seen hugging Gautam while observing the fish all around. In another picture, Kajal is seen waking up on the bed with Gautam by her side. She was seen in a blue silk dress in the photo. A bottle of water was seen on the bedside table. There were more seating arrangements in the resort too.

Here are the photos:

Kajal also posted images of her sexy backless satin blue gown from the underwater resort. Sharing the images, she wrote, “Am I looking at the fish or are the fish looking at me?”

Kajal took to her Instagram on Wednesday, to share some stunning photos relaxing at the beach and at her over-the-water lavish bungalow.

While Kajal shared several photos that featured her different moods, she also took the opportunity to post a few mushy photographs with her husband having an awesome time at the impressive resort.

In a set of two photos that Kajal shared on her Instagram, one was clicked outside their stunning resort and the other a rather romantic picture of the two looking into each other’s eyes with lots of love, the actress confessed that Gautam is her ‘partner in everything’.

“My heart feels so happy and free, every time I visit this beautiful country!” Kajal wrote alongside one set of pictures while sharing another, she wrote: “Tranquillity in paradise.” Her mushy caption for a picture with Gautam read: “Partner in everything.”

Kajal and Gautam tied the knot on October 30 in a grand ceremony held in Mumbai. She had made the grand announcement on Instagram on October 9. Photos from her haldi, mehendi, wedding and after-party had been going viral on the internet and now the internet is in love with the couple’s honeymoon photos.