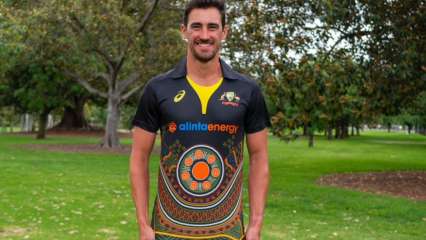 Australia will wear a new jersey for the upcoming three-match Twenty20 International series against India. In the official Twitter handle of Cricket Australia, they uploaded a photo where Mitchell Starc is seen wearing a jersey that pays tribute to the indigenous people of Australia. In the tweet, Cricket Australia said, “The Australian men’s team will celebrate our First Nations people this summer by wearing this incredible Indigenous playing shirt for the entirety of the #AUSvIND Dettol T20 series.” In the following thread, it outlined the details of the jersey and what does the colors symbolize in the life and society of the aboriginal society.

The jersey was designed by Kirrae Whurrong woman Aunty Fiona Clarke & Butchulla and Gubbi Gubbi woman Courtney Hagen, the shirt continues the storytelling of the 1868 cricket team. The stars in the jersey represented the ancestors of the aborigines and those that came before them. The green circles symbolize the strength between people and the continuation of their journey in life.

On the back, there is an emblem that states the thousands of years men have fought, educated and stood for the rights of the community. It has 11 signs which symbolize the 11 men around the campfire that represented the first indigenous cricket team of Australia in 1868. There is a band that shows the river and land and it acts as a connection with families to nature. The centre of the jersey has a big emblem that shows the past, present and future aboriginal cricketers. The jersey has been winning the internet and people have expressed their happiness that this is the right step by Cricket Australia in acknowledging the contributions of the indigenous people in the country.

Men’s cricket in Australia is all set to come back for the first time since March 2020 when the sport was stalled due to the coronavirus pandemic. The Australia women’s team played a series against New Zealand at the Allan Border Field in Brisbane.

Alia Bhatt talks about shooting in Telegu for ‘RRR’, reveals she...