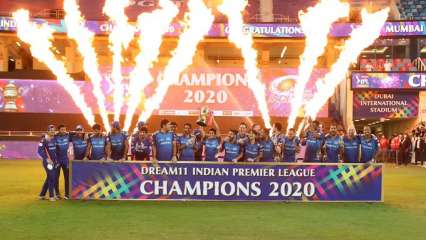 “We made sure Ishan and Surya had confidence – just have to let Ishan loose, and Surya is a more matured player. The kind of form he was in, I should have sacrificed my wicket for Surya. But throughout the tournament he has played some incredible shots,” Rohit remarked.

Mumbai Indians had tremendous depth in their batting and bowling. Suryakumar Yadav was in fine form while Ishan Kishan became the first uncapped player to score over 500 runs in a single edition of the IPL. Hardik Pandya, Kieron Pollard and Krunal Pandya have all chipped in at vital times and that has proven to be the ultimate success for Mumbai Indians in the batting. In the bowling, Jasprit Bumrah has been phenomenal while Trent Boult stepped up admirably to fill Lasith Malinga’s vacancy. James Pattinson, Nathan Coulter-Nile and Rahul Chahar all managed to provide breakthroughs for the Mumbai Indians.

“We said at the start that we need the winning habit. We couldn’t have asked for anything more, right on the money from ball 1 and we never looked back. I think a lot of credit goes to the people who worked behind the scenes – often they go unnoticed. Our work started long before the IPL started, and we wanted to make sure we filled the gaps in previous seasons. I had to find the balance to get the best out of them. I’m not someone who can run behind them with a stick, and it’s important to instil confidence in the players. Krunal, Hardik and Pollard have done their job for a long time, they know their roles. Rahul missed out today, and we need to make sure we put an arm around him and assure him that he didn’t do anything wrong and that it was a tactical move,” Rohit stated.

Mumbai Indians’ fifth title triumph, in addition to becoming the second team after Chennai Super Kings to defend the title as well as winning the IPL three times from the No.1 spot are a testament to them being the greatest team in the IPL.

‘Hasn’t happened to me before’, says Vaani Kapoor on having three...