On Tuesday, taking to his verified Instagram handle, actor Himansh Kohli has called out a fake video that shows him allegedly apologising to his former girlfriend, singer Neha Kakkar.

While sharing a screenshot of an edited short clip that was posted on another social media handle, Himansh wrote on his Instagram stories, “I wonder when such manipulative content will be banned from social media. And who is benefitting from all this nonsense? What`s more upsetting is that people are sharing this actively. Please wake up and stop spreading the hatred and this fake post.” 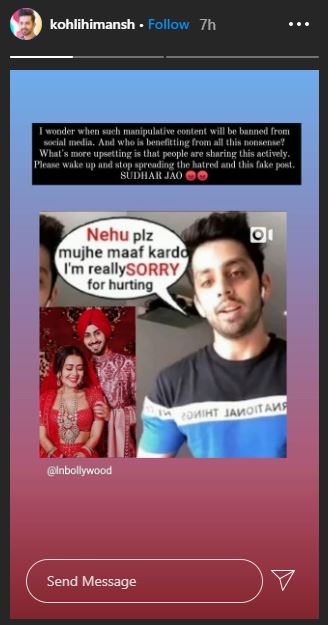 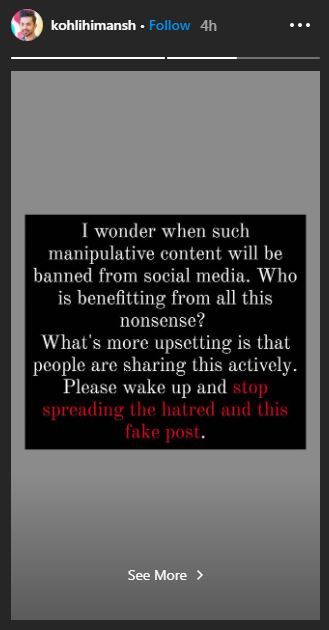 Reportedly, the couple broke up two years ago, and have moved on.

In fact, a couple of weeks ago, in an interview to The Times of India, while reacting to the news of Neha’s marriage, Himansh had told the portal, “Well if Neha is indeed getting married, I am happy for her. She’s moving on in her life, she has somebody and it’s great to see that.”

Last month, Neha tied the knot with singer Rohanpreet Singh as per the Sikh wedding ceremony Anand Karaj. Pictures from their wedding festivities that included several ceremonies such as Roka, haldi, mehendi and reception held in Punjab, took the internet by storm. In fact, just days before tying the knot, Neha and Rohanpreet also released a song titled “Nehu da vyah” to celebrate their wedding.

Himansh made his debut with the TV series “Humse Hai Liife” in 2011, and entered Bollywood in 2014 with the film “Yaariyan” opposite Rakul Preet Singh. Since then he has been seen in films like “Sweetiee Weds NRI” and “Ranchi Diaries”.