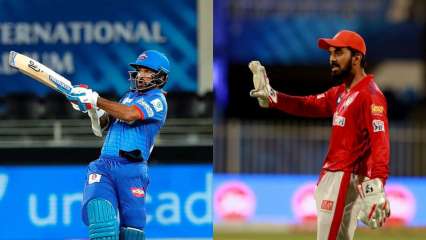 The race for the Purple Cap is already intense with Jasprit Bumrah and Kagiso Rabada not having much of a gap when it comes to the wickets tally. However, when it comes to the Orange Cap, the race is evenly fought even here. KL Rahul and Shikhar Dhawan are the top two batsmen in IPL 2020 and are the only players to have hit over 600 runs in this edition of the tournament. KL Rahul is the leading run-getter in IPL 2020 with 670 runs in 14 matches at an average of 55.83 while Shikhar Dhawan has 603 runs in 16 games at an average of 46. Heading into the Mumbai Indians vs Delhi Capitals final in Dubai, Shikhar Dhawan needs only 68 runs to become the Orange Cap winner.

However, if Shikhar Dhawan manages to score 67 runs and is tied with KL Rahul on 670, who will win the Orange Cap? The answer will be KL Rahul as he has played the least amount of games while Shikhar Dhawan has played three extra games. KL Rahul holds the record for the highest individual score by an Indian player in the IPL as he smashed 132 against Royal Challengers Bangalore.

Shikhar Dhawan smashed two back-to-back centuries against Chennai Super Kings and Kings XI Punjab as Delhi Capitals started brilliantly in the initial league stages of IPL 2020. However, as the tournament progressed, Dhawan’s form tapered away and he scored three ducks in four games. In the game against Royal Challengers Bangalore, Shikhar Dhawan hit a fifty as they won the game to seal their spot in the playoff.

After getting out for another duck in Qualifier 1 against Mumbai Indians, Shikhar Dhawan managed to hit an aggressive 78 against Sunrisers Hyderabad as they won the match and registered only their second win in an IPL platyoff. This was the first time that Shikhar Dhawan has crossed over 600 runs in the IPL, having hit over 500 runs in four consecutive editions of the tournament.

Delhi Capitals would be aiming to win the tournament for the first time as they look to stop four-time champions Mumbai Indians from winning an unprecedented fifth title.

Why KL Rahul MUST be picked for Melbourne Test along with...