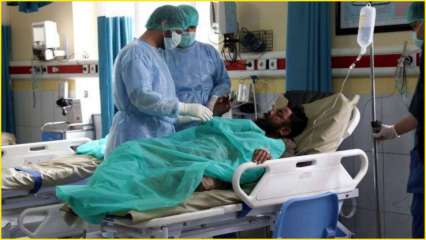 Doctors at the hospital described the situation to IANS as complete chaos. “Just look at the queue formed outside,” pointed out Dr Roshan Mathew, in-shift Chief Medical Officer (CMO) of the emergency ward, to this correspondent.

“We are already short staffed where half our staff is catering to COVID patients, while the remaining are divided in serving OPDs/IPDs, emergency wards or serving their isolation/quarantine period. The current spike is breaking our back. The patients are queueing outside the wards and we are striving hard to provide medical care to each one,” Mathew said.

Apart from the current spike in cases, Mathew stated that another reason for the huge influx of patients coming to the hospitals was the conversion of two top-tertiary care hospitals in Delhi to dedicated COVID facilities. This has diverted patients from the two hospitals — Lok Nayak Jai Prakash Hospital (LNJP) and Guru Teg Bahadur Hospital (GTB) — to AIIMS, raising its occupancy by 10% at least.

Records show that LNJP and GTB were treating at least 15,000 outpatients daily before turning into dedicated COVID facilities, while AIIMS used to treat 1.5 lakh patients every day.

Dr Amarinder Singh Malhi, Assistant Professor, Department of Cardiovascular Radiology, AIIMS, gave another reason for the additional load in the hospitals. He observed that patients with non-communicable diseases, who had been holding back due to fear of contraction, are now visiting the hospitals.

“We are into the ninth month of the pandemic and the patients with underlying disease are now realizing that it is not going anytime soon. So now they are approaching hospitals to resume their treatments. Unfortunately, many among them are contracting the viral disease during the treatment, leading to further increase in the infection tally of the capital city,” Malhi added.

However, one major aspect that has ontributed majorly to the surge in Covid cases is the increasing laxity in following COVID-appropriate behaviour among the public. This correspondent noticed a group of four men inside AIIMS roaming with their masks off. When it was attempted to capture them on camera, the men turned away and covered their face with a handkerchief and gamccha (cloth towel).

Malhi also said that he is witnessing such laxity inside the hospital campus as well. “However, I stop and ask them to wear a mask right then,” he added.

The medical director of the Delhi Government-run Rajiv Gandhi Super Specialty Hospital also blamed COVID-inappropriate behaviour for the increase in cases. “The number of admissions has increased significantly in comparison to last month. Laxity in following anti-Covid norms in the festive season has resulted in a massive spike in daily numbers,” he told IANS.

“Universal masking, frequent hand washing and keeping the physical distance norms should see us through. Managing Diwali is a big concern. IMA appeals to the people for sublime and safe celebrations,” said Dr RV Asokan, honorary secretary-general of the IMA.

He said that the current upsurge in COVID cases is in line with the spikes observed throughout the world while adding that the severity of the illness has reduced.